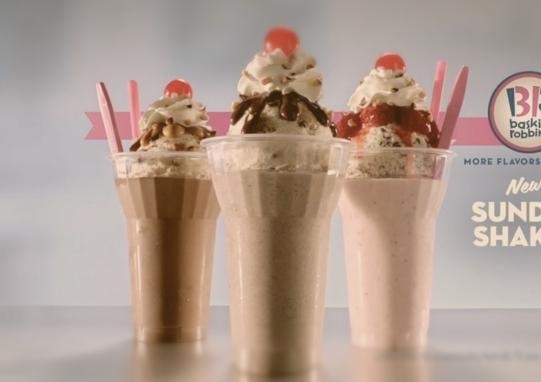 With summer in full swing, it’s the perfect time to cool down with a refreshing beverage, and there are fewer better drinks to cool down with than a nice, thick milkshake. Any shake lover is certainly spoiled for choice when it comes to amazing products, as you do not have to travel far to find a top-quality milkshake in your favorite flavor.

Well, it seems that many eateries are taking advantage of the summer vibes by introducing a range of new deals and products for all of us milkshake lovers out there. Summer 2017 has seen some awesome food and drink products be released, and now we can add a few shakes to that list!

Reports have been surfacing for the last few weeks that Baskin-Robbins are currently testing a new line of shakes for a future release, and they sound simply incredible. The new Sundae Shakes are a frozen dessert treat that combines a typical Baskin-Robbins milkshake that is topped with a delicious sundae ice cream.

The new items have been tested in only a few areas of the country, a common process for testing the popularity of new items before a wider release, with Detroit and New Orleans being the lucky locations to try out the new Sundae Shake.

Prices for the new dessert mash-up are $2.39 in Detroit, although this is subject to change in new markets upon a wider release.

Sonic are once again offering an exceptional summer promotion, offering half price shakes after 8pm at participating locations.

For anyone that loves a late-night shake (who doesn’t!) then be sure to head on down to your local Sonic to see if they are one of the many locations running this awesome promotion. As if half-priced shakes weren’t enough of a deal, Sonic have decided to add Ice Cream Slushies into the mix too!

With over a dozen milkshake flavours, there’s certainly no lack of choices for your shake fix this summer, made even better by a fantastic discount.

While there is no end date set for the promotion, it usually runs until the end of August, so you should still have plenty of time to grab a few half-price shakes at Sonic this summer!

Del Taco’s ‘Buck and Under’ menu offers some truly great deals for customers, including the brand-new Mini Shake for only $1!

The deal will be available indefinitely at participating restaurants, with the 9oz milkshakes available in the standard chocolate, vanilla, and strawberry flavors. Sadly, the mini shakes appear to have sacrificed the whipped cream topping, but for $1 it is very hard to be annoyed!